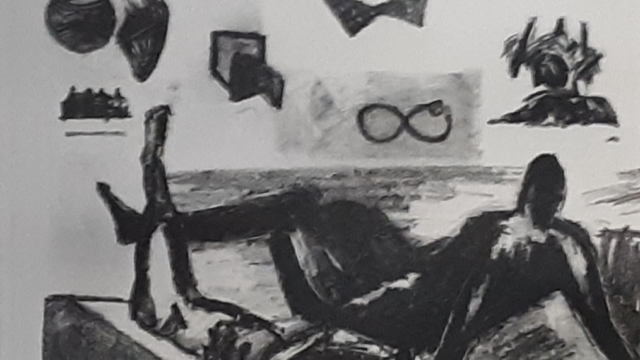 To the old woman, wordwork is sublime because it is generative.
It makes meaning that secures our differences, the way in which we humans are like no other life.
—Toni Morrison

Along a series of voiced ‘book pages’ echoing from my creative sonic archive of more than 20 years ago, comes an intersection generated with material lifted up from the unconscious. Collisions of narrative are reconsidered along the timescape of dreams.

It’s very much of the now and of a past that appears in the present. What is spoken and whirled emits a barely linear story accessing the cycles of death, but also the collective symbology of end-times and freedom. This melding is driven by an energetic stirring of borrowed lines from the poet-theorist, Nicole Brossard, and the theorist-philosopher Gilles Deleuze—from texts produced in the early 1970s (A Book by Brossard and Negotiations by Deleuze). These ‘pages’ comprised a sonic engine originally played in a gallery space and ceded over to the machine’s shuffle mode.

Now, in present time, both a past and a future unfurl. The ship of the night floats through turgid waters. A neat continuum of story is interrupted within itself swirling like an invertebrate, horizontal and regenerate. The underworld knows no time. Sounds, like dreams, elude our grasp towards a future deemed to be untouched, untarnished.