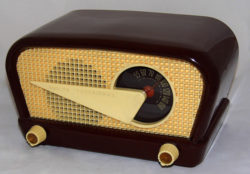 In our media-saturated lives, with numerous streams of sonic, textual and visual detritus always available, a Philadelphia gallery inaugurated an analog, exquisitely local and quite aleatory media event.

NEXUS/Foundation for Today’s Art transformed its gallery space into a low-powered radio station for two months at the end of 2008 and the beginning of 2009. They gathered artists and musicians, performers and DJs, activists, poets and scholars and other members of the public to broadcast in unusual ways during regular gallery hours.

“Narrowcast” is a more accurate description. The low-powered station only reached the surrounding Crane Arts Building neighborhood allowing for singular listening experiences—live radio with all its meandering voices, sounds and random static. Nothing was streamed simultaneously for distant audiences.
This is radio as it’s always been: surprising, even glitch-laden, passing by your ears just once.

Radio cohort Cambra Moniz-Edwards and I were invited to co-curate an afternoon of radio artistry during NEXUS/Radio. Neither of us lives in Philly or even near one another (Cambra currently is in New York City, and formerly of California; I spent my first three decades in Philadelphia, and have lived in California since the early ‘90s). On a bright and chilly January Saturday afternoon in Philly (and a bright and warmer morning in Santa Cruz), a bi-coastal conversation ensued.

Radio’s legacy and the signal’s idiosyncratic nature soared. Phone lines weakened mysteriously; engineer-artists quickly hooked up our voices via Google Chat making a seamless rescue—and an odd admixture of lo-fi radio and long-distance digital interface. Cambra spun the works of numerous artists. Playing DJ throughout the afternoon, she called me periodically and we talked about my own radiogenic projects and, of course, about radio’s ghostly bodies and voices.

Despite the live tenor of the event, Cambra and I decided to record our voices (we are sound artists, after all). In editing the bits and pieces of interview excerpts from the afternoon, I slipped in a few excerpts of my work being discussed, including Ligature, Complicité and Cicatrix (full versions of these works can be heard on the Radio Artist page). We also talked about radio’s mad-man, Antonin Artaud, and the Third Coast International Audio Festival’s 2008 short documentary project, Radio Ephemera, which both Cambra (Pills) and I (Cicatrix) participated in.

Unless it’s part of the artistry, I’m usually a stickler for clean sound on the radio itself, particularly its online incarnation. But, I decided to keep the original recording of the interview with all its intrusions from the phone lines during some of our recorded conversation. It almost has that long-lost ethereal quality of the broadcast medium’s nascent days: ghosts inviting themselves into the conversation.