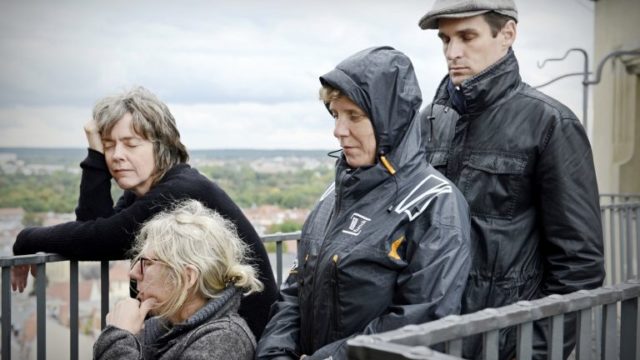 It’s a rainy evening in October 2016. Two abandoned houses in the city center of Halle stand dark. Festival visitors were waiting for doors to open to these dormant spaces.

It’s a fitting launch to the festival and the book’s introductory chapter, both called Radio Revolten—radio turning, revolving, a revolution of sound and space.

The festival’s Radio Oracle, perched high up in the market church towers, feels like an overseer to the month-long events. And it is the narrow outdoor bridge that might make a visitor queasy in the same way that sound can dismantle the listener, whose origin is mysterious—like a radio signal. (Nausea is rooted in the word noise.)

Both festival and text were collaborative projects. Four co-organizers (co-editors, too) consider how Halle—the German city—was transformed and radio itself, especially the town’s independent community programming and listening station, Radio Corax (the raven) evolved and grew.