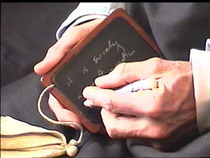 A bound and gagged voice asks three questions about the loss of language; the nosy neighbor of Echo and Narcissus offers her opinions about the doomed pair; and a couple remembers their first year of marriage when one of them practiced complete monastic silence.

Five pieces comprise the series; they can be presented individually or in pairs or as a whole series.

The entire series was commissioned for Outer Ear at Experimental Sound Studio, Chicago, in 2000. Silence, in particular, has been broadcast, presented online or in festivals nearly a dozen times.

Silence
An intentional weaving of two voices, a shared story that braids an impressionist documentary about a couple whose first year of marriage is remembered for its challenges. One of them was practicing to become a monk—a silent, monastic retreat and evolution into a coupling of silence and voicing.

Bound, Gagged and Stutter
Radio artistry that resembles snapshots: a voice is bound and gagged and stutters questions about the nature of language.

Echo
The imagined voice of Echo’s nosy neighbor as she listens to the repetitions of her disappearing nymph-friend and her concerns about her increasing (and deleterious) involvement with a beautiful boy.